One of the most important discoveries to come out of the research conducted by Nathan Johnson and the Kodoryu group is that the techniques catalogued in the antique forms inherited from China such as Naihanchi, Sanchin, Seisan and Kusanku are of a proactive nature with a very specific function for each form such as civil arrest, Sai techniques and disarming techniques. This has been a key insight into explaining the sequence of each kata and the relationship between techniques.

Proactive application of the techniques significantly alters the course of the bunkai and it becomes possible to deduce from the catalogue of techniques what the context for use and underlying function was. For example Naihanchi is an ingeniously devised form that instructs the practitioner in proactive locking techniques that restrain and subdue without brutalising or injuring the person being detained. The techniques are ordered in a way to create a progressive study of crossed arm (right arm to right or left arm to left) finger, wrist, elbow and shoulder manipulations that lead into two key holds which may have been used to then bind the wrists together with rope, or to bring the person onto their backs for further effective restraint. The absence of striking, hitting when a person is down, chokes etc suggests that Naihanchi's applied context was within civil arrest and could have been used by police, bodyguards or guards of the royal courts.

Here is an isolated section of the Naihanchi set,


Proactive civil arrest techniques seek to avoid a situation descending into a violent confrontation, for example in modern policing an officer making regular arrests does not wish to have to fight every person they arrest otherwise it would be almost impossible to do their job without sustaining massive injuries and facing bigger risks than they already do. Proactive techniques seek to overwhelm and take control of a person and situation while minimising as many of the possible responses from the person being arrested, Naihanchi fulfills all of these criteria.

With a clear purpose, context and removing the endless 'what ifs' that arise with reactive techniques and making them proactive it quickly becomes clear that these were the essential criteria in the formation of the antique kata.

Self Defence and Kata Don't Mix! 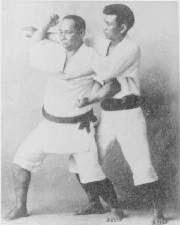 In modern Karate kata are taught primarily as a vehicle for self defence, endless 'scenarios' are pitched as possible interpretations of movements dealing with various attacks. The practise is carried along deeply entrenched in the belief that when the time comes it will work for real and when faced with genuine violent intent lots of dojo practise is the way to prepare for it. Reactive self defence applications are severely limited and fail to address so much that needs to be considered for genuine self protection. Here are several of those issues for consideration.

Self defence is not a duel. So many of the bunkai and kata applications created only work on the premise that there is one person attacking at a given moment and that there is enough time and distance to see an attack coming. Close the initial distance, add overwhelming stress, fear and adrenaline and there is an immediate breakdown of many the beautifully orchestrated responses. Add in the fact that people are very unpredictable, a person may not know they are in a potentially violent chaotic situation until it is already well underway leaving kata techniques behind while desperately trying to survive and escape. Being faced with two or more people at once is something almost never considered by bunkai enthusiasts or if it is often at best the attackers take turns to attack and receive a response.

Extreme levels of violence. There are endless applications for dealing with a hook punch, straight Karate punch and various static holds but rarely does the creative interpretation venture out into extreme levels of violence such as dealing with a person whose opening gambit is biting a nose or an ear, gouging an eye etc How different would the outcome be in the photo above of Choki Motobu if his attacker had grabbed him and bitten his ear off? these levels of violence may be less common but that does not exclude them from consideration as in order to prepare effectively for violent confrontation all areas most be covered.

Concealed weapons. A concealed blade can in a moment turn the tables on someone confident in an unarmed exchange. Many applications effectiveness depends on there not being a concealed weapon employed at some point, a very dangerous assumption.

Fighting injured. Kata applications usually depend on a person being fully able bodied and without injury. If for example an unprovoked assault led to a broken arm and the attack continued how many of the techniques would be applicable? there are many other factors to consider that could also render useless refined dojo aquired kata skills such as tiredness, intoxication, sickness, stress and so on.

In spite of there being literally thousands of applications created for the various kata to deal with potential attackers that come under the classification of self defence, as demonstrated above so much is left unanswered and this should raise doubt around the idea that kata is an effective medium for reactive self defence techniques. There are just too many variables to consider to create a practical self defence kata, could it be that self defence and kata just don't mix?