The Secret of Wing Chun - Part III (Last One I Promise!) 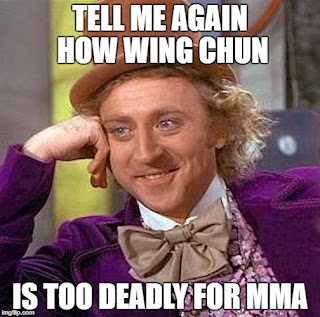 Wing Chun has millions of followers worldwide, with huge support from the film industry it has achieved a cult like status. Wing Chun techniques translate beautifully to the big screen and after seeing Donnie Yen dispatch opponent after opponent its hard to not let the imagination run wild and think what if?!!!
Well complex choreography is not reality when it comes to violence and no one needs to look far to see how badly Wing Chun fighters have performed in no holds barred and mixed martial arts contests. The video above is just one example of many available. The usual excuses almost always follow any criticisms of Wing Chun, such and such a fighter wasn't a real Wing Chun expert, he wasn't able to use the dangerous advanced techniques, my master would have...... and Wing Chun is just for the street where there are no rules.

Well hats off to anyone who steps up to fight in MMA to test themselves, their ability and their practice instead of citing lineage, rank, anecdotes about the good old days when training was really hardcore and so on!

Fighters aside what does this say about the technical content of Wing Chun and most importantly the forms that are the core of the system?


Is this an effective way of preparing someone for the chaos of real violence? (note: the example is for demonstrating the first form practiced in Wing Chun and is not a comment on or critique of Yip Chun).

If the forms were not intended for unarmed combat could the original function have been for something more pragmatic? it was! Armed combat!


Nathan Johnson (demonstrating in video) has spent the last decade unraveling the original function of the mysterious Wing Chun forms (Note: Nathan has practiced and taught Wing Chun and Karate for over 40 years). Over the course of the next year Nathan will be gradually publishing his findings and will be available for seminars for those wanting to explore in depth the roots and origins of Wing Chun.